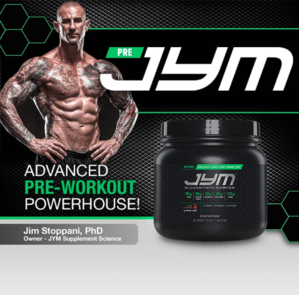 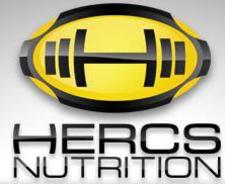 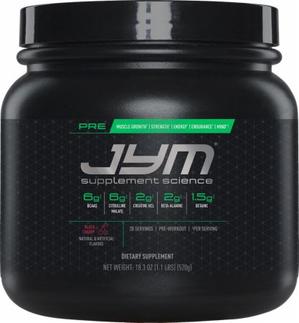 The Power of Pre JYM
No Proprietary Blends

Look at the supplement facts panel on your favorite pre-workout product and you'll most likely see the term “proprietary blend.” Supplement companies want you to think this means they've created a special blend of ingredients that magically work together to deliver unique results. Because this blend is so amazing, they have to keep the amounts of each ingredient secret so no other company steals the formula.

The truth, however, is that propriety blends can serve a different purpose. They allow some supplement companies to hide how little of each ingredient they've actually put in a product. This can result in cheap, under-dosed, ineffective supplements.

Pre JYM doesn't use proprietary blends. Take a look at the supplement facts panel and you'll see the actual amounts of all 13 ingredients. I have nothing to hide. I'm proud of the amount of each and every ingredient I've included.

Proper Amounts
For the reasons detailed above, many supplement companies are moving toward transparency and axing proprietary blends. That's a good thing. However, some of these companies are still guilty of grossly under-dosing ingredients.

Take citrulline malate, for example. The research on this potent amino acid shows that you need 6 grams per serving. Most pre-workout products leave out citrulline entirely, and only a few of them provide anywhere close to 6 grams.

No "Abbreviated" Formulas
A handful of companies are as fed up as I am with proprietary blends and under-dosed formulas, but they fall short by using “abbreviated” formulas. An abbreviated formula is one that uses proper dosing of all ingredients, but only includes a few ingredients.

Take, for example, a pre-workout formula that includes beta-alanine, creatine, caffeine, and tyrosine. There's nothing wrong with it, but it could be made a lot more effective through the addition of ingredients like citrulline malate, betaine, and BCAAs, to name just a few. Why would companies not create the most robust formula possible? Because adding more ingredients costs too much money.

Pre JYM includes 13 ingredients that complement one another to prime the body for intense workouts, making it a complete pre-workout supplement. If you're looking for the most complete exercise supplement program available on the market today, take my Post JYM Active Matrix after your workout to get even greater amounts of potent ingredients like Creatine HCl, Betaine, and Beta-Alanine.

No Concentrates
Some companies also try to trick buyers by calling their pre-workout product “concentrated.” A serving of one of these “concentrated” products can contain as few as 3 to 6 grams of powder. What kind of magic did they use to cram enough creatine, beta-alanine, citrulline, arginine, caffeine, and other ingredients into that tiny serving? They didn't use any magic, which is why some of those “concentrated” formulas also include proprietary blends. That's also why the serving size of Pre JYM is more than 26 grams. It contains 13 ingredients at proper, powerful amounts.

Most importantly, I've been training since I was 11 years old. Before each of my workouts, I would draw on all of my experience and all of my education to concoct my own pre-workout supplement, combining ingredients from 13 different bottles and tubs.

That's why I developed Pre JYM. I wanted to give my friends, colleagues, all of you, and myself the ability to access, in one bottle, the best ingredients in amounts suggested to help build lean muscle, torch body fat, improve strength, and boost speed.*

Full amounts of 13 science-backed ingredients.
6 grams of citrulline malate to help promote better muscle endurance and bigger muscle pumps.*
6 grams of BCAAs in the 2:1:1 ratio for blunting muscle fatigue, boosting muscle performance, and increasing muscle growth.*
2 grams of Con-Cret® Patented Creatine HCl for greater strength, endurance, and muscle growth.*
2 grams of CarnoSyn® beta-alanine to boost muscle power, strength, endurance, and muscle growth.*
1.5 grams of betaine for greater power and strength during workouts.*
600 milligrams of N-acetyl L-cysteine to support your body's amino acid profile during exercise.*
500 milligrams of Beet Root extract to enhance nitric oxide for bigger pumps and better energy.*
300 milligrams of caffeine to help boost alertness and drive, increase muscle strength and endurance during workouts for greater training intensity.*
150 milligrams of AlphaSize® alpha-GPC for better drive, focus, and strength in the gym.*
50 micrograms of huperzine A to increase mental focus and establish a stronger mind-muscle connection.*
5 milligrams of BioPerine® to enhance absorption of nutrients for even better results.*

Let's take a closer look some of the ingredients and amounts used to make Pre JYM such a pre-workout powerhouse.*

The BCAAs are three amino acids—leucine, isoleucine, and valine—that share a common structure.
Research suggests that leucine is the most critical because it stimulates muscle protein synthesis (i.e., muscle growth).*
Studies suggest the optimal ratio of leucine to isoleucine to valine in a pre-workout product is 2:1:1, exactly the ratio in Pre JYM.

In the body, citrulline is readily converted to arginine, and then to nitric oxide (NO). Research suggests that citrulline increases arginine and NO levels in the body better than arginine itself.* Arginine undergoes excessive breakdown by the intestines and liver. Studies have shown that citrulline does not, so whatever you consume is readily absorbed and put to use.*
Citrulline malate has also been shown to be an effective energy booster. One study reported that subjects consuming 6 grams of citrulline malate experienced an increase in ATP (energy) production during exercise and an increase in phosphocreatine recovery between bouts of exercise.*
Research also suggests that subjects supplementing with citrulline malate before a chest workout could complete more reps on most sets compared to subjects taking a placebo.

There are many studies suggesting that creatine supplementation leads to significant gains in muscle strength and power, as well as muscle growth.*
Creatine HCl is made by attaching a hydrochloride (HCl) group to creatine.
Adding the hydrochloride group lowers the pH of creatine, making it more acidic. This drastically increases creatine's solubility in fluids, which may help increase its absorption and help to reduce stomach issues.*

Beta-alanine is an amino acid that gets taken up by muscle fibers and combines with the amino acid histidine to form carnosine.*
Research suggests that carnosine increases strength and power, improves endurance and recovery, and muscle growth.* This is increased further when taken together with creatine, as in Post JYM Active Ingredients Matrix™.
One study suggested that beta-alanine supplementation in boxers increased their average punching power in the last 10 seconds of a round more than those taking a placebo. Being able to maintain punching power late in the round is similar to maintaining more strength and power later in your workouts, meaning you can lift more weight for more reps.*

Beet root extract is a rich source of nitrates. When you consume nitrates, they are broken down first to nitrites and then to nitric oxide (NO).
Beet root extract is a direct supplier of NO and uses a different pathway to produce NO than citrulline and arginine!*
Research suggests that nitrates can improve blood flow to working muscles and the brain.* The result is greater training intensity and endurance, and increased focus during workouts.*
Research has also found that nitrates can directly improve the muscle's ability to generate ATP (energy) to further improve endurance during intense exercise, such as lifting weights.*

Betaine, also known as trimethylglycine (TMG), is a modified version of the amino acid glycine.
Betaine supplementation has been suggested in studies to improve muscle strength and power production, increase the number of reps done with a given weight, and improve endurance.*
University of Connecticut researchers reported that supplementing with 1.25 grams of betaine twice per day for two weeks increased power and muscle force on the bench press.*
Betaine has also been shown to significantly increase protein synthesis following workouts as compared to a placebo. This can help lead to greater long term muscle growth.*

Alpha-glyceryl phosphoryl choline (alpha-GPC) is a naturally occurring phospholipid compound that plays a critical role in the way the brain, nervous system, and muscles function.
Alpha-GPC helps boost brain function and mood, improves reaction time, and helps increase focus and the mind-muscle connection during workouts.*
When combined with caffeine, L-tyrosine, and huperzine A (all found in Pre JYM), alpha-GPC delivers clean mental stimulation and focus that lasts throughout workouts.*

NAC is the amino acid cysteine with an acetyl group attached to it. Studies have suggested that the acetyl group makes it more stable and allows the body to absorb and use it better than plain cysteine.*

50mcg of Huperzine A

This extract from club moss is a potent brain booster that can promote better focus, enhanced memory, and elevated mood.*
Huperzine A helps maintain higher levels of acetylcholine, which is important for brain and muscle function.*
Combining it with alpha-GPC, which increases acetylcholine levels, has an additive effect, resulting in enhanced drive and focus in the gym, as well as increased muscle strength and endurance.*

Research shows that caffeine can increase muscle strength, improve muscle endurance, and decrease muscle fatigue during workouts, which allows you to take your training intensity to a higher level.*
Caffeine is also suggested to be a nitric oxide (NO) booster. One study in the American Journal of Cardiology reported that healthy young men taking 300 mg of caffeine experienced an increase in NO levels and an increase in blood flow to muscles.*

BioPerine® is a patented extract of the fruit of black pepper, or long pepper, that contains standardized amounts of the active ingredient piperine.

Taurine is a specialized amino acid that is important for endurance and muscle strength.*
Exercise depletes taurine levels, thereby impairing strength and endurance, so it's critical to get a proper amount of taurine after every workout to replenish what was lost.*